Diet Supplements, Reviews
Add your review
4.2 Out of 10
Buy Now 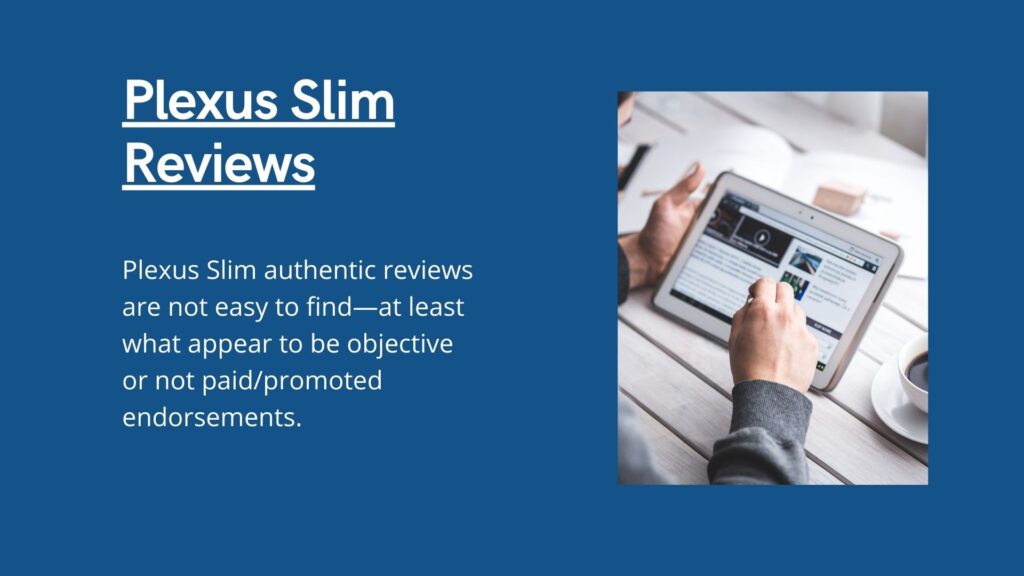 People looking to slim down want to know how effective Plexus Slim is. Do you really achieve weight loss by drinking the pink drink?  Plexus Slim authentic reviews are not easy to find—at least what appear to be objective or not paid/promoted endorsements.

Weight loss products and diet supplements can often be found on Amazon; Plexus Slim is not one of them, but it can be found on eBay. Reviewers there—the small number of them—had little to say about the product specifically, save a very recent review by a customer who said,   It works but you have to give it at least 60 days.

On the Plexus Slim site, with 239 reviews, you won’t be surprised to learn it earned a 3.9 average. That said, there were a number of poor reviews and even a number of very poor reviews as well, including a recent one by user “Debbie” who said:

“Something in the new slim has put my bladder on overdrive. I stopped taking it and it went back to normal. So must be having a reaction to it.”

“The new Slim is awful, I have extreme itching and neck stiffness just days after starting it and pretty sure I’m allergic to something in it.”

Plexus Slim’s MLM distributors are called “ambassadors,” are shown how to write a good review, and cautioned to be careful of staying within the right lane—the FTC lane—by avoiding health claims and to not “exaggerate what an average consumer can expect to lose if mentioning your weight loss.” And then provides an email address for more information on how best to write a good review. 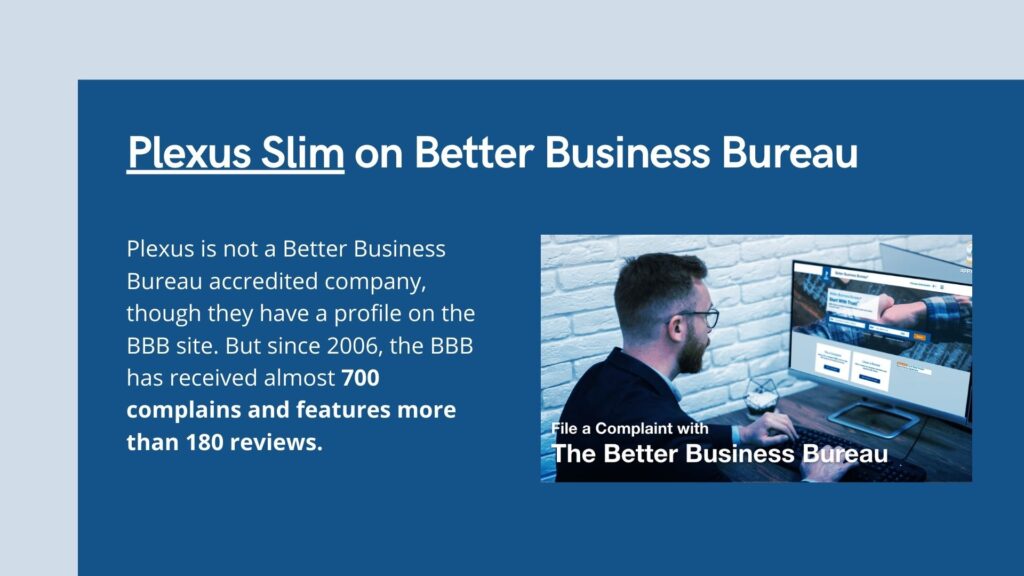 Plexus is not a Better Business Bureau-accredited company, though they have a profile on the BBB site. But since 2006, the BBB has received almost 700 complains and features more than 180 reviews.

MLM companies have tight rein on reviews, as the products must be purchased through the official website—or, preferably through distributors—so you have no idea if a review you’re reading is from a real person not connected to the company, or an “ambassador” looking to earn a few dollars.   I say a few dollars because, in almost all MLM businesses, the tiny top tier make big money while the widest part of the distributors’ pyramid makes little to nothing. 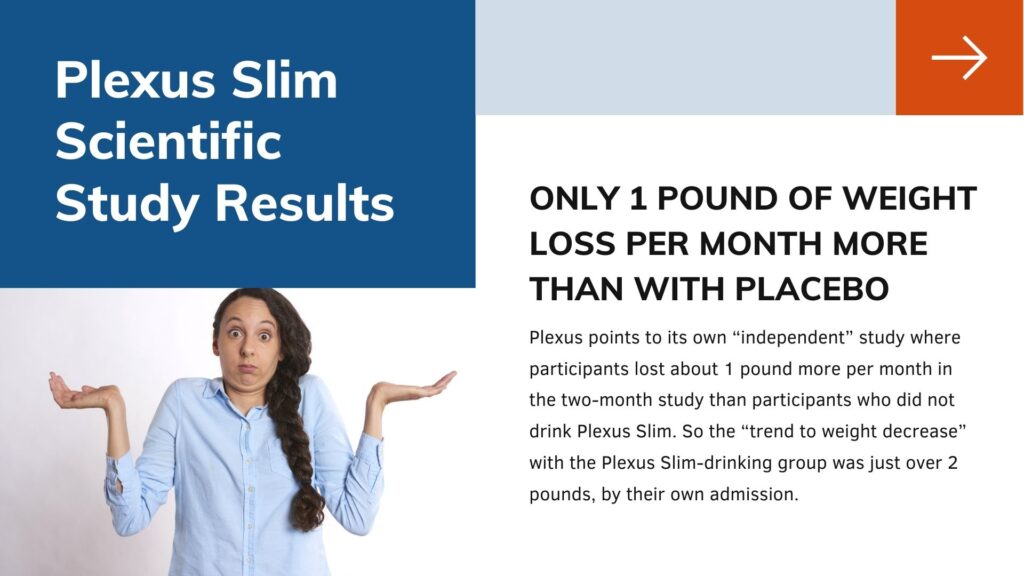 Plexus Slim, or the “Pink Drink,” is a powdered mix made with a “premium microbiome activating formula” that contains ingredients clinically-demonstrated to improve gut health and promote weight loss. Plexus points to its own “independent” study where participants lost about 1 pound more per month in the two-month study than participants who did not drink Plexus Slim. So the “trend to weight decrease” with the Plexus Slim-drinking group was just over 2 pounds, by their own admission.

Each package comes with 30-single serving packets. The whole concept behind this weight loss product is to make your digestive system as healthy as it can be and at the same time, support healthy glucose metabolism. To lose weight, you drink it before meals. If you’re just interested in overall gut health, Plexus says, drink it whenever—just not more than twice a day.

It comes in raspberry, lemon, and watermelon flavors. We’ll see what people think about the taste shortly. The “Pink Drink” must be mixed with at least 12 ounces of water (preferably more) about 30 minutes before meals, twice a day. Plexus Slim by itself is $90 for 30 servings, so it you’re taking it twice a day for weight loss, this is a fifteen–day supply.

Plexus Accelerator-Plus and Plexus Block are the supplements users are encouraged to purchase in combination with Plexus Slim. You take Plexus Block before a meal with carbs; this supplement contains a brown seaweed blend and white kidney bean extract—you could get both of these from kelp and legumes, respectively.

Plexus Slim ingredients include the essential nutrient chromium, which helps metabolize fats—in fact, chromium is the first ingredient listed and provides 167% of what your body needs daily. In other words, nearly twice. Turns out, chromium as a supplement is controversial.   According to WebMD, chromium may be helpful for people with diabetes, since there’s some evidence it can lower glucose levels. But it’s usually used as a beneficial supplement if someone is deficient or has “poor overall nutrition.”

Studies that it can aid in weight loss are mixed. And WebMD says 20 to 35 micro grams (mcg) per day is adequate. One serving of Plexus Slim provides 250 mcg—and the dosage is two pink drinks per day—which is about 10 times what we may need, although apparently it’s unclear just exactly how much is not quite enough. Researchers do say that 1,000 micrograms a day “should be considered the upper limit” because “excessive doses” can worsen insulin sensitivity.

In clinical studies, diabetics were given doses of around 200-plus micro grams in split doses throughout the day. “Some experts recommend that no one should take more than 200 mcg/day without medical advice. Doses of 1,000 mcg/day may be dangerous—theoretically there could be an increased risk of cancer. There is also risk of cognitive and motor dysfunction from high doses. So don’t use chromium in high doses without talking to your doctor first. And, too much chromium may damage the liver or kidneys.

For me, this is a full stop! Plus, you can get all the chromium you need naturally from many different foods, from dairy to whole grains.

Now onto the Plexus Slim Blend. Alpha Lipoic Acid, a natural antioxidant, is one that your body makes itself, so you don’t need it as a supplement. And you won’t be surprised to learn Plexus Slim also includes popular weight loss supplement Garcinia Cambogia (hydroxycitric acid), which is known to help assist in losing body fat and some studies claim it may suppress appetite. But the jury is still out on that. You’re better off without it.

Then there’s so-called “superfood” mulberry. Mulberry may, like other ingredients, help lower blood glucose, but there’s no proof. Since it’s an herb added to dietary aids and not a “drug,” it hasn’t been approved or even clinically studied by reputable, peer-reviewed medical science researchers. Will it hurt you? I don’t know, but I suspect probably not. Then again, what’s the right dose when it’s a powder, if you can even be sure of its purity? I mean why pay for this, when it’s efficacy is debatable at best? Eat actual mulberries if you want to experiment.

The Science Behind Plexus Slim

So you now know the science behind the main ingredients. The one we’ll talk about here is Xylooligosaccharide (XOS).

Here’s the thing: if you have a very specific metabolic disorder, XOS can potentially promote an optimal gut microbiota profile, and consequently reduce the risk of the disorder called T2DM. But not all probiotics help with weight loss, and some of them may even cause weight gain.

The effects depend on the probiotic strain, and may also vary between individuals.  Xylooligosaccharide is a non-digestible dietary fiber “that preferentially stimulate the growth of prebiotic Bifidobacterium and other lactic acid bacteria in the gastrointestinal tract. And XOS provide a plethora of health benefits and can be incorporated into several functional foods, according to the National Institutes of Health (NIH).

A clinical trial found simply that: “Prebiotic XOS may be beneficial in reversing changes in the gut microbiota during the development of diabetes.”  Improved gut health is great. And if you lose a pound or two because of it, even better. But don’t pay $100 a month for a diet drink that contains XOS. Don’t take it from me—ask your doctor.

Bottom Line: Is Plexus Slim Worth a Try? 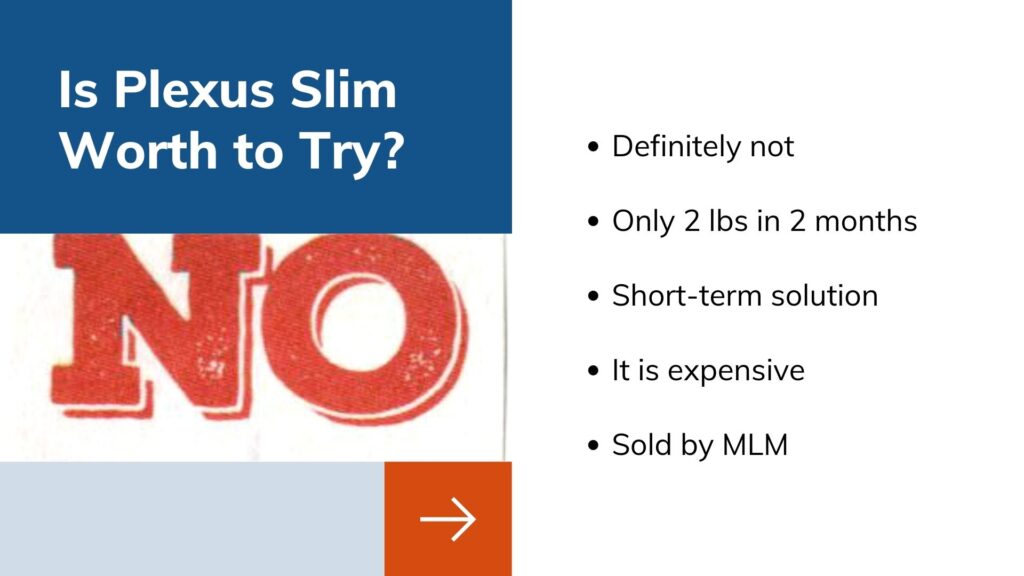 Definitely not.  I agree that a healthy gut is an overall win for your body, so incorporating prebiotics into your diet is just smart—but from plant-based foods, not Plexus Slim.

Eat more garlic and avocados, for starters.   Drink Pink and Shrink? Come on. Even in the study Plexus Slim touts, participants who drank the mix twice a day for two months lost just two pounds more than the people who didn’t drink it. Two. Pounds.

All this talk about getting your metabolism going? This isn’t rocket science. Some people have slower metabolisms than others; that’s a fact and is part of the biology (and genetics) that help to define our body types. But we have the power to adjust that by eating foods that naturally boost metabolism—beans, berries, even dark chocolate —and ultimately, just by being more active overall.

Plus, instead of forking over more than $100 a month for Plexus Slim, you could spend that instead on healthy, fresh foods. And, I am absolutely convinced that weight loss products sold by MLM distributors—whatever they’re called—come with claims that cannot always be verified at best and not trustworthy or erroneous at worst. It’s just that simple for me.