Diet Supplements, Reviews
Add your review
6.6 Out of 10 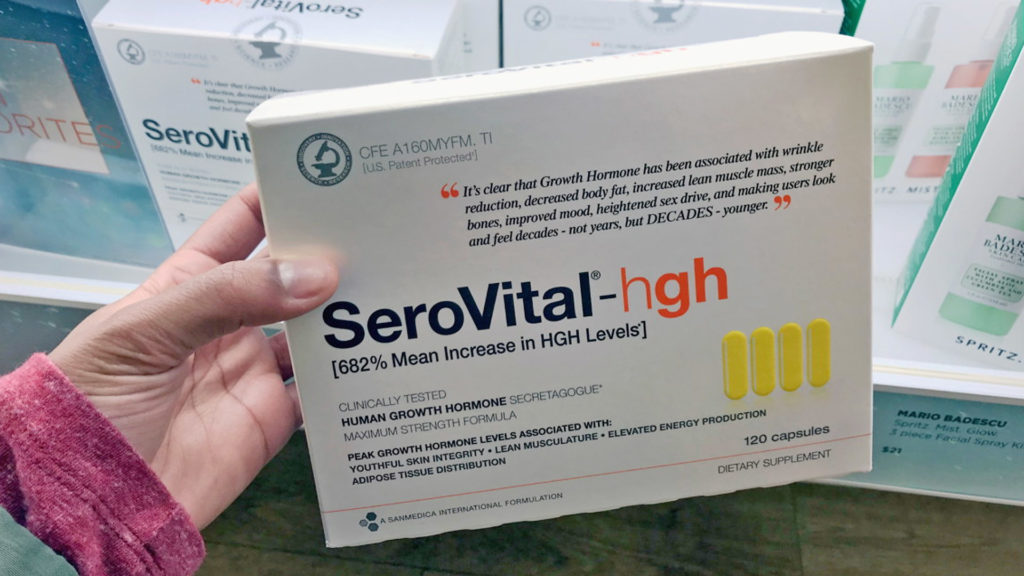 SeroVital HGH is marketed as a human growth hormone (HGH) supplement sold in a capsule form throughout the internet and at GNC. It claims to have come about through 30 years of research, and has been said to naturally stimulate the pituitary gland to increase the body’s HGH levels by nearly 700 percent, helping the customer achieve more youthful-looking skin, some weight loss, improved lean muscle mass, and more energy overall. [1]

SeroVital HGH can be used by both men and women. It is cautioned to avoid taking this product if you are pregnant or nursing.

SanMedica International produces and sells SeroVital HGH is called, and they are based in Salt Lake City, UT. They currently have a B-plus rating on their Better Business Bureau profile, opened in 2014, with five customer complaints and no reviews. [2] 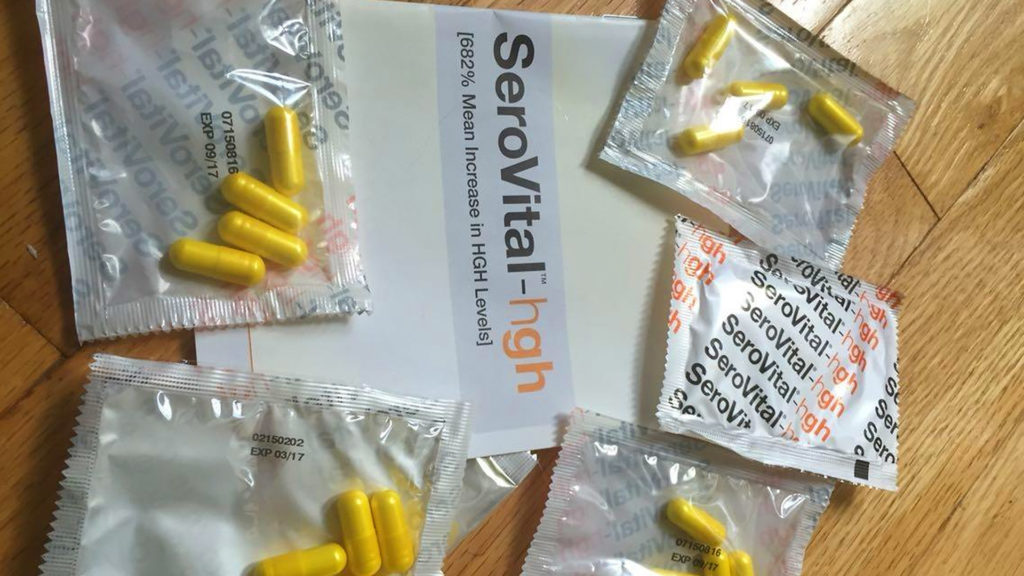 A recent Shape magazine article starts out with a very provocative statement:

“When you see a 50-year-old actress who can pass for 35, you can bet that good genes aren’t the only things responsible for her youthful glow.”

Allure magazine, in its “Anti-Aging Special” issue, highlighted growth hormone as its year-end call-out. And it’s no secret that the rich and famous have been visiting some of the most expensive clinics in the world for controversial human growth hormone (HGH) therapy.

Why? Because they believe HGH helps reduce body fat, increase lean muscle mass, boost mood, heighten sex drive, give them plenty of energy, get rid of wrinkles, and tighten saggy skin… making them look and feel decades – not years, but decades – younger. In fact, some are even calling it the ”Fountain of Youth.” …

HGH is a single-chain peptide hormone that’s manufactured deep within the brain…in the pituitary gland. It’s released into the bloodstream and travels throughout the body. It passes into your fat cells and can actually cause them to shrink. It enters your muscle cells, stimulating lean muscle growth so you look more tight and toned, even if you haven’t been working out. When it reaches the skin, it maintains healthy blood flow, ramps up collagen production, and strengthens the underlying substructure of the skin’s critical architecture, keeping your skin firm, tight, and smooth, which is why so many experts call HGH the “youth” hormone… and why some believe it’s the key to combating aging. [3]

The company makes some large claims based on their research on HGH. In the past, many people would have to go into the doctor to get injections; SeroVital offers an over-the-counter capsule alternative.

But SanMedica International claims SeroVital does not contain any hormones at all—rather a blend of amino acids to help stimulate the gland that produces HGH. They also claim there is no time limit to how long you can take SeroVital; you can take it as long as you want to see results. For best results, they say not to eat anything two hours before or two hours afterward, which is why many people like to take the capsules in the morning.

Lastly, the nutraceutical company offers a 30-day money back guarantee on all of their products. You will need to reach out to their customer service team to obtain an RMA number, and then you will send back the product either used or unused for a refund.

They certainly make it sound great. But they do offer some reality check as well.

As with HGH injections, SeroVital is not a ‘magic bullet,’ but one part of a healthy lifestyle choice including a sensible diet and exercise regimen. [3]

…while SeroVital is far less expensive than prescription HGH injections, it’s still not cheap. SeroVital will cost you about $100 a month. [3]

Warnings: Do not exceed suggested daily serving [4 capsules]. Not for use by individuals under the age of 18 years. Consult your healthcare provider before taking this product if you are pregnant or nursing.

The Science (or Lack Thereof) Behind SeroVital 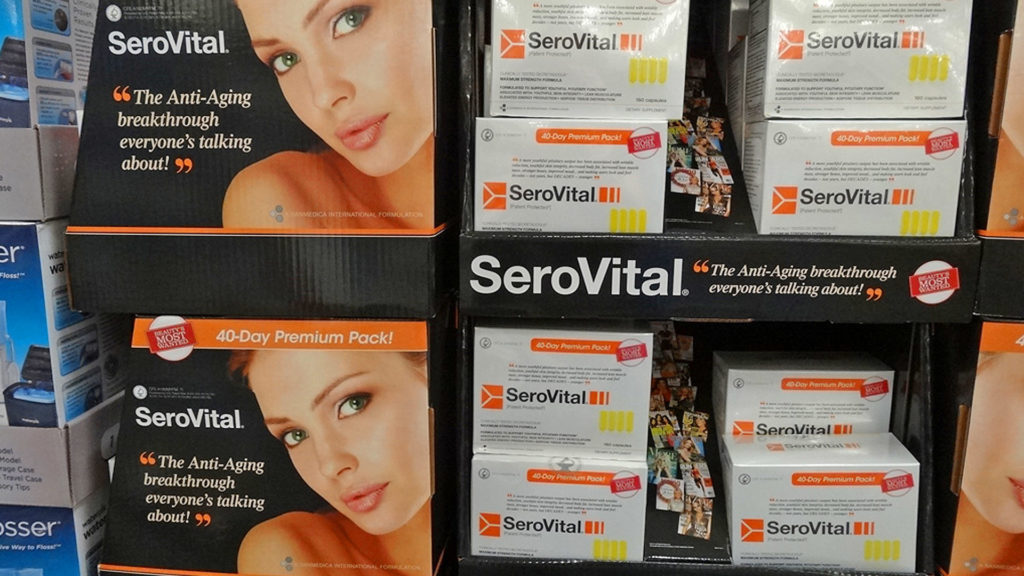 The main website talks about many different studies showing why their formula works wonders for the body without actually injecting artificial hormones, but they don’t cite any, so it’s hard to fact-check. There are questions about SeroVital’s effectiveness because it doesn’t contain actual hormones. Let’s look at these amino acids and see if there’s any evidence they do what SeroVital claims.

L-lysine hydrochloride: A study published in 1981 in Current Medical Research and Opinion showed promise, but there were a couple of caveats:

The results showed that oral administration of a combination of two amino acids (1200 mg 1-lysine plus 1200 mg 1-arginine) provoked a release of pituitary somatotropin and insulin. This phenomenon was reproducible and the growth hormone secreted in response to this stimulation had biological activity (as demonstrated by a radioreceptor assay and somatomedin induction). The effect appeared to be specific to the combination of the two amino acids; neither of the amino acids demonstrated appreciable stimulating activity when administered alone, even at the same doses. [4] (emphasis added)

L-arginine hydrochloride: See the notes above on L-lysine.

Oxoproline: This amino acid is best known for the stimulation or added support of transporting amino acids to their rightful places in the body. In a study published in 1996 in The Journal of Biological Chemistry, they proved that oxoproline stimulated and enhanced the transport rate in the body. [5]

L-glutamine: From a study published in the May 1995 American Journal of Clinical Nutrition:

N-acetylcysteine: This one doesn’t have great news behind it. A study published in 2012 Aging (Albany NY) found,

Although antioxidants have been repeatedly tested in animal models and clinical studies, there is no evidence that antioxidants reduce already developed age-related decline. …Here we compared effects of SkQ1 and N-acetyl-L-cysteine (NAC) on age-dependent decline in …growth hormone (GH)…in … rats. When started late in life, supplementation with SkQ1 not only prevented age-related decline but also significantly reversed it. With NAC, all the observed effects were of the lower magnitude compared with SkQ1 (in spite of that dose of NAC was 16000 times higher). [7] (emphasis added)

Schizonepeta: SeroVital includes this as an immunity booster. Known also as Japanese catnip (not to be confused with “real” catnip), it has been used for colds, fever, and sore throat. It’s also used for heavy menstrual periods, and skin disorders like eczema, psoriasis, and allergic rashes. But according to WebMD, there’s insufficient science to back up the anecdotal. [8]

Word On The Street About SeroVital

SeroVital reviews are numerous and very mixed. GNC.com reviewers ranked it 3.8 of 5 stars, UltaBeauty.com reviewers 3.9 of 5, and Amazon.com reviewers 3.5 of 5. So fair across the board. Fewer side effects sem occur with amino acids than actual injections, but some users did experience joint pain, skin irritation, and the inability to sleep. Other complaints included complicated to take and expense. But many found the product effective and easy on the stomach.

“My wife and I have been taking SeroVital for about three months. I have noticed that her face looks younger (less wrinkled) and her skin tone looks brighter. I sleep better (less lying awake thinking) and I have about 20% more energy which makes me feel younger. This stuff definitely works. BTW we strictly follow the directions on the box.” [9]

“This makes my second month of using Seravitol. See a bit of smoother skin less sagging. The side affects are nausea, headache, stiff muscles, Still not sold on this, Hormone Pellets are really the way to go for Hormone therapy. There is No HGH in Seravitol as they claim, it is simply flowery language to make it sound as if you are getting HGH but your Not. You have to go to a Dr. To get a real dose of Hormone therapy. But as long as you think you’re getting that maybe it’s just mind over matter.” [10]

“Useless, I have been taking 4 tablets a day for over months now and nothing. Not one bit of difference in weight, none in the way I feel and nothing in difference of my skin just simply NOTHING! Only difference is I’m out a lot of money. Save yours and don’t waist [sic] it on this stuff.” [1]

One of the complaints on the Better Business Bureau caught my eye as well. The customer had issues with return/refund, but I wanted to highlight the first part of the complaint, the reason why they wanted a refund in the first place:

Product resulted in severe health-related issues. I purchased this product in September after being told I would have a 30-day period to return item if not satisfied. I began taking product around November and experienced abdominal pain so bad I ended up in the emergency room 3 times in a 4-day… period with abdominal pain and diarrhea, it was horrible. … I don’t know all the ingredients in this pill but clearly, they failed to do due diligence in specifying the possible side-effects of abdominal pain or diarrhea so I can only imagine what the long-term effects may be. I called customer service and spoke with a woman … who was rude and unprofessional and attempted to provide me with medical advice regarding the side effects of the product by stating to me that “our product would not cause that.” She did not identify herself as a medical expert but provided medical advice in regard to my health. [11]

Every supplement affects every individual differently. Gender, age, genetics, pre-existing medical conditions, and individual body chemistry—as unique as a fingerprint—can affect how a supplement works on you. That’s why supplements always add that “individual results may vary” disclaimer, and it’s why reviews for a drug or supplement can be all over the spectrum. Only you and your doctor can figure out how it works for you, so always be forthcoming and transparent with your doctor about side effects you experience, as well as if the substance doesn’t seem to be doing anything for you.

The Bottom Line: Is SeroVital HGH Worth A Try?

Depends.This supplement claims to increase HGH levels in your body, but the reviews were rather split down the middle regarding its effectiveness. Sure, there seem to be fewer side effects than actually getting full-blown injections, but is the cost worth it? It really depends on your personal body chemistry. Handle with care.

What Works Better Than
SeroVital HGH?