Diet Accessories, Reviews
Add your review
6.7 Out of 10 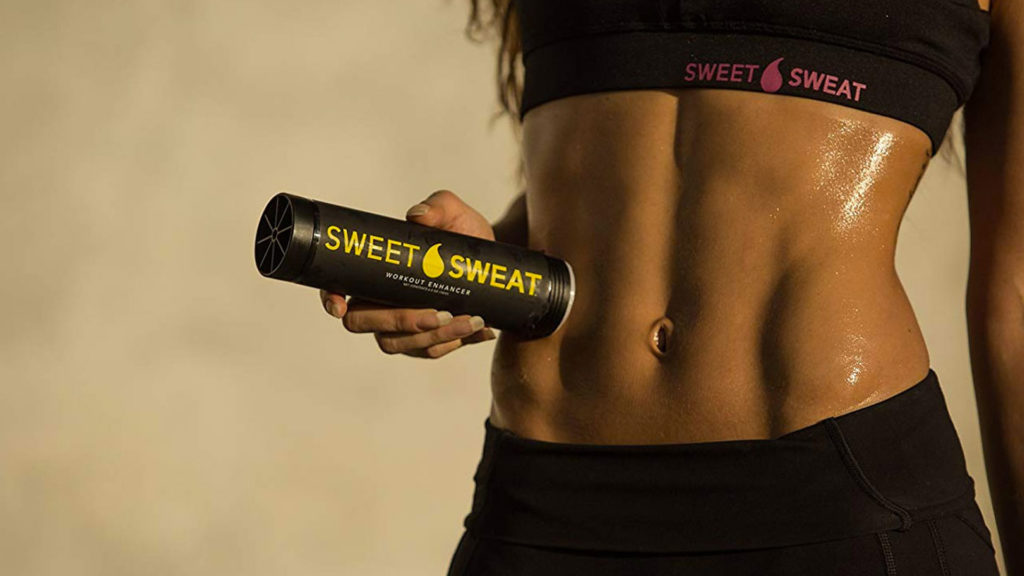 Sweet Sweat started as an athletic body “cream.” The product was created in 1977 by then well-known MLB draftee player and fitness expert Jeff Pedersen “to enhance and accelerate their workout programs.” He tested his body cream on himself and members of his athletic club. According to the Sports Research website—the makers of Sweet Sweat—Pedersen’s colleagues and friends saw “significant and immediate” results.

With colleagues and friends clamoring for the cream, Pedersen brought his Maxercise Creme to the market in 1980. Seven years later it was renamed Sweet Sweat and described as a gel. [2] Later, the trimmers were added to help concentrate the thermogenic effect in specific areas.

The trimmers – for waist, thighs, and upper arms – are said to increase core body temperature during exercise, improving perspiration levels and heat production. The arm trimmers “provide thermal compression to the bicep area, promoting an additional increase in heat and sweating when used during exercise.” Sports Research claims their Sweet Sweat thigh trimmers while increasing thigh “heat and sweat” it will “not only keep your muscles ‘loose’ during exercise but may also help fight against sore hamstring and quad injuries.” [3] [4]

Constructed from latex-free neoprene and contoured for lower back support, naturally flexible to adjust to your size and shape – allowing for a full range of motion, and containing textured grid inner linings to repel moisture absorption and prevent slipping, prices range from $20 to $40.

Sports Research has an A-plus rating on the Better Business Bureau website and has been an Accredited Business since August 2015 (only two reviews, evenly divided, and one customer complaint about a delivery issue, which was resolved). They are headquartered in San Pedro, California, and the customer contact number is (800) 633-9308, or [email protected]. [5] 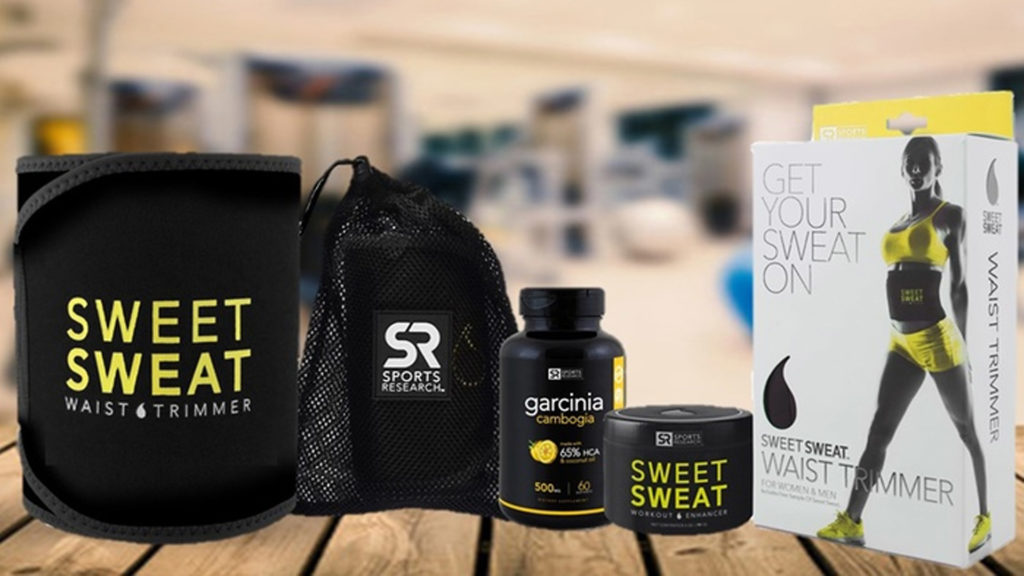 “Breaking a sweat during your workout is significant,” Sweet Sweat says. “It takes energy to sweat, more energy than most people may think. And like all energy consuming process [sic], sweating helps burn calories.” [6]

Sweet Sweat says a 1984 “independent study” by Dr. Robert A. Wiswell, Ph.D. and then chair of the University of Southern California Physical Education Department deemed their product “successful.” Over time, the cream was joined by a line of supplements and the trimmers by parent company Sports Research (SR®). SR says its supplements are made with “trademark, and proven ingredients …heavily researched, scientifically sound products.” [2]

One specific claim concerning athletic use of Sweet Sweat gels and trimmers is “to substantially improve circulation, accelerate warmup and recovery time and help them to get the best from their workouts.” [2]

Sweet Sweat suggests combining its trimmers and its “Workout Enhancer” gel (because of course, they do—they’re running a retail business). They claim the gels when applied to the skin “right before exercise…with your elevated heart rate, Sweet Sweat will begin to activate, producing an increase in circulation and sweating to all areas applied.” The original gel has a “natural fragrance,” but it also sells a coconut gel. [2]

As for weight loss, no Sweet Sweat does not work. There is no way to target burning fat with these trimmers. The jelly may suffocate certain parts increasing the amount of sweat, but that is just a release of water weight. When you look it up, White Snow Petrolatum is simply…pure petroleum jelly. As in Vaseline. Sweet Sweat soups it up by adding a bunch of other oils to it, which may make it smell nice and maybe moisturize your skin a little, but for the most part, it’s really just fancy Vaseline.

The Science (or Lack Thereof) Behind Sweet Sweat 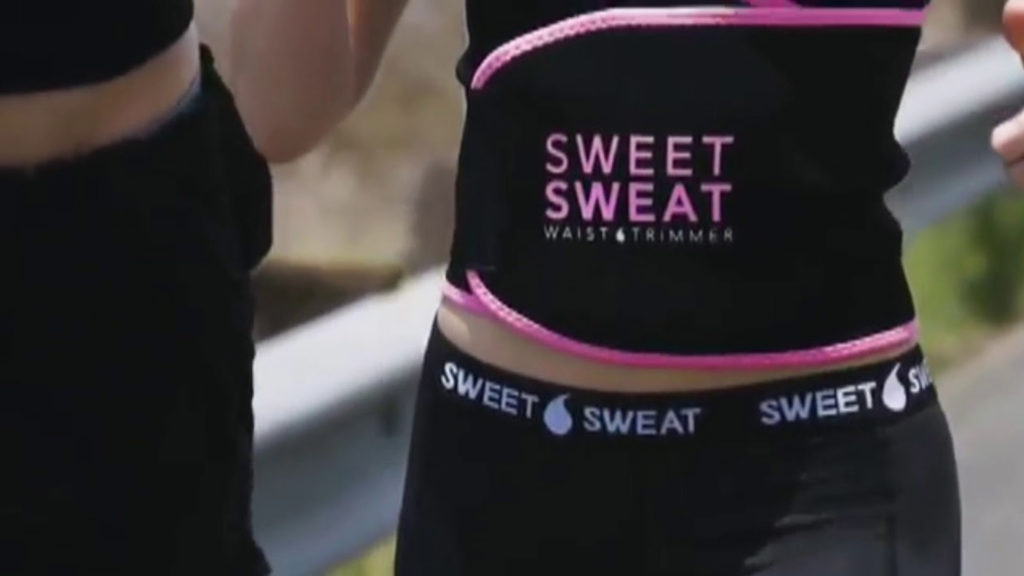 Okay, let’s look at a couple of things in relation to the claims Sweet Sweat makes.

Are they accelerating warm-up times for athletes? This is certainly possible. We see elite athletes huddling in their sweatshirts and track pants during Olympic rain delays. It’s pretty common knowledge that warm muscles perform better and tend to have fewer injuries. Every exercise program out there starts with a warm-up. So yes, I can see where a little extra layer of oil and neoprene could help hold in body heat to keep targeted muscles warm.

But what about targeted fat burn?

It’s not happening. The body burns fat wherever it happens to find it first. Usually, that means from the top down. If all you have is abdominal fat, then yes, that will burn first. But it’s not a given. Eventually, the body will get around to all of it, but you can’t target it. [9]

Building muscle can be targeted, however, by specific weight training exercises. As you build muscle, your body automatically burns more energy to feed that new muscle. If you’re not sucking up vast amounts of carbohydrates, then the body will turn to burn stored fat. So in a nutshell, targeted muscle build equals random fat burn. [10]

And let’s talk about waist trimmers in general. What does the science say?

Actually, there aren’t currently any journal-published clinical studies on the effectiveness or lack thereof of waist trimmers, but there is some research out there. And it’s not really complimentary.

Pete McCall, a spokesman for the American Council on Exercise and an exercise physiologist and personal trainer, makes an excellent point in an article from the Los Angeles Times in 2010:

In his opinion, a neoprene wrap would actually make it harder to burn body fat and abdominal tone muscles. When a person wears a snug wrap around the belly, the muscles that generally support the midsection can relax, he explains, so they don’t burn as many calories or get as toned as they would without the wrap. “That’s why trainers are moving away from weightlifting belts. The only time I would have a client wear any type of belt is when they’re coming off back surgery, and that would be under the guidance of a physical therapist or doctor.” [11]

In the same article, Gary Hunter, a professor in the School of Nutrition at the University of Alabama-Birmingham, brings up the more common issue:

[Hunter] agrees that a neoprene waistband will help rid the body of water, not body fat. He also notes that people who are overheated can’t work out as hard as they would typically—yet another reason why the belts might be counterproductive for weight loss.

Though a neoprene band wouldn’t be as dangerous as a full-body rubber suit—which has been known to contribute to deaths of wrestlers trying to lose pounds before a weigh-in—Hunter worries that the bands could encourage dehydration and possibly heat exhaustion or heat stroke, especially during intense workouts in hot environments. “If you want to be able to exercise strenuously and get the most out of it, you have to have a way to dissipate heat,” he says. “The [belly] is a big source of heat loss, so this could be dangerous.” [11] (emphasis added)

Unfortunately, those are tiny voices against an avalanche of folks who absolutely swear by trimmers. But I have to wonder how many of them are already fit and are just looking for a little more definition. This result seems more in line with science.

Word on the Street About Sweet Sweat 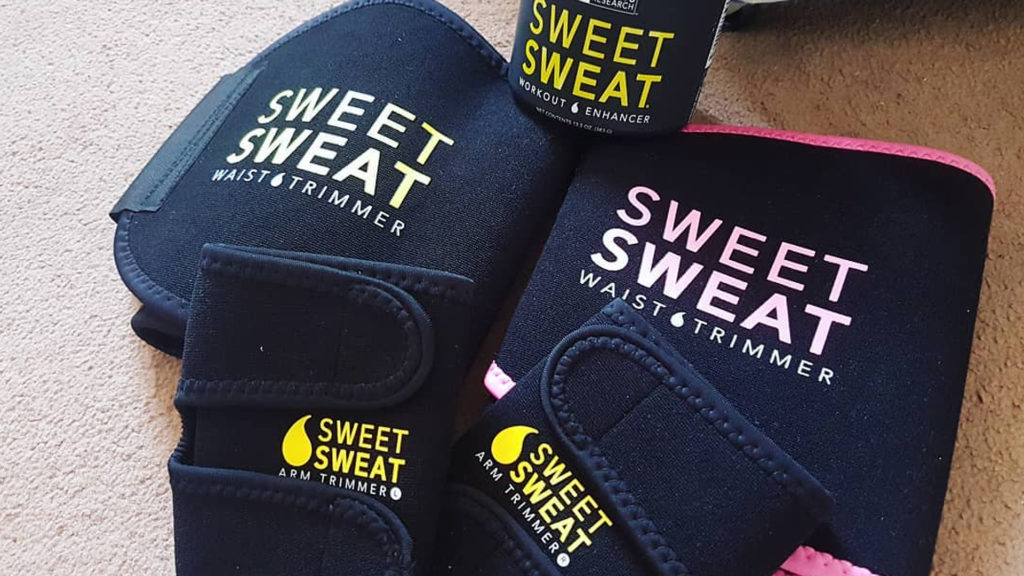 And “Kyle Kimberlin,” who posted before and after (two weeks) photos which, if accurate, show a pretty dramatic difference. [13] But of course, she left no information on what she was doing in terms of diet and exercise, so how do we know it was the belt/gel itself?

Most of the one- and two-star reviewers’ biggest complaint had to do with fit problems.  But one-star reviewer “Liz” posts a headline of: “Fake Claims.”

“There is literally no scientific evidence whatsoever backing up Sweet Sweat claims. The belt is okay, but the cream is just white petroleum (Vaseline). The cream won’t make you sweat; the activity you do makes you sweat. Do not waste your money on this product. I sure did. Not impressed.” [14]

Liz’s point is among a chorus of complaints about the lack of evidence and the argument—one found frequently as a criticism of sauna suits, for example—that the weight loss is what’s known as water weight, which comes right back.

Eric from Wisconsin tackled this in his analysis, voted the most significant answer to questions about Sweet Sweat:

People always say it’s ONLY water weight and that you’ll gain it back. But this is not altogether true. Now keep in mind that the human body is made up of 70 percent water. Think about that.”  He goes on to argue that the correlation between “sweat generated, heat buildup and energy dissipation” results in water and mass weight-loss. He says the science backs this up.

Your stomach area has the weakest blood supply in the body, thus more accessible for the gut to store fat there. This is because such poor circulation guarantees less fuel burnt in that area during exercise. By trapping the heat in that area, your body is forced to compensate by causing the few vessels there to dilate, leading to more blood flow needed to get rid of that heat buildup, accompanied by the generation of sweat to cool down that area.

Your body is now ‘forced’ into using those fat stored in the ‘love handles’ which it had been storing up. So yes, calories are burning, water is being shed, and weight is slowly but surely being lost. [15]

Which all sounds lovely, but as we’ve mentioned above, fat isn’t target-able. If all you’ve got are the love handles, then yeah. Otherwise, it’s going to start at your face and work downward. And the cautions above about overheating, especially in the belly area, should be taken into consideration as well.

The Bottom Line: Is Sweet Sweat Worth a Rip-Off or Worth to Try?

Risky. Not in terms of danger, though we outlined some pretty decent science about that. And if you’re an athlete looking to loosen up in a hurry or hang onto those warm muscles for a while, it’s probably great. But Sweet Sweat really doesn’t do what it claims—burn fat—which makes it a risky investment if nothing else. I personally would steer clear.

Health officials caution against waist trimmers. But customers love them. Love. Them.

What Works Better Than
Sweet Sweat?